THE VERDICT
With the Spin System, Andover Audio has expanded its game changing SpinBase concept to a complete hi-fi package that can be set up with minimal fuss and won't dominate your room.

If you're a boomer who grew up in the 1960s and 1970s like I did, you'll remember that no home was complete unless it had a stereo system in the living room. After you moved into a new place, the number one priority would be to get your tunes up and running, even before arranging furniture.

I guess it was around fifteen or twenty years ago that I suddenly realized this reality had changed. Watching my sister listening to music coming from her iPhone's tiny speaker while working in the kitchen, I couldn't help but feel that we'd somehow ended up going backwards. Music is a form of spiritual and emotional nourishment, and if we don't have access to a good-sounding audio system for music-listening, we will be malnourished.

Andover Audio is a company that aims to bring the nourishing living room hi-fi experience back into people's lives. A couple of years ago it introduced the SpinBase powered turntable speaker ($299). In my review of the SpinBase, I raved about how unexpectedly excellent it was and how it comprised a great basic music playback solution for an office or bedroom. Now, Andover is kicking the SpinBase concept up a few notches with the Spin System, a complete matched component system.

A complete Spin System features a SpinBase at its heart and adds: a turntable for your records called the SpinDeck; a subwoofer to pump up the bass called the SpinSub; and a rack to hold everything, including a bunch of records, called, you guessed it, the SpinStand.

While the Spin System may sound like one of those old-school hi-fi rigs, operating it couldn't be more different. People used to marvel at the sheer number of switches and controls on their hi-fi system, but controlling all those knobs, levers, and sliders could also get daunting. Andover has taken a totally opposite approach here. In daily use, the Spin System effectively has just a single control, the large volume knob on the front of the SpinBase, and that's pretty much it. With minimal training, a five-year-old could work this system with no problem. A remote control for adjusting volume and switching sources would be a nice addition, though the SpinBase's various inputs are conveniently all always-on.

Because my full review of the SpinBase is available at the above link, I will simply point you there to get the details on this compact and stylish turntable speaker solution. Basically, the SpinBase is a single-point powered stereo speaker that was designed to also function as a vibration- isolating base for a turntable. I know for most audiophiles that idea sounds like one that couldn't possibly work (placing a turntable directly on a speaker?), but trust me, it does.

Along with its line-level analog stereo RCA and Bluetooth wireless inputs, the SpinBase has a built-in phono preamp input to hook up a turntable with a moving magnet cartridge. The SpinBase has received one small update since I reviewed it: a 3.5mm audio output that carries a full-range line-level signal to the new SpinSub. For anyone who owns an older SpinBase, Andover has a trade-up program that will let you swap your unit out for an updated version at 50 percent off. This offer has a limited timeframe, so don't dawdle if you plan to make the move! 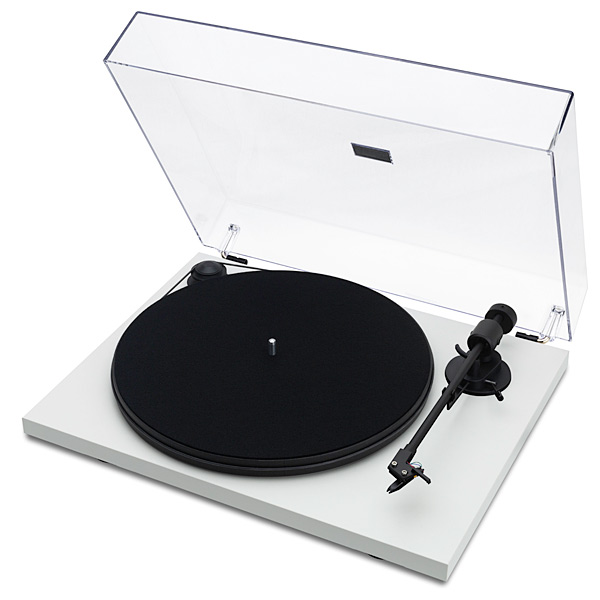 The SpinDeck ($349) is made for Andover by turntable specialist Pro-Ject and appears to be essentially the same as that company's Pro-Ject Primary E, a strong contender in the affordable turntable ranks. This belt-drive model continues the simplicity theme, with totally manual operation and no complex adjustments. One of the biggest hurdles with most record players is getting them all put together and set up, but the SpinDeck pares those tasks down to just a few very simple steps. I can't think of any turn- table that's easier to get up and running. The platter is already in place out of the box, and the tonearm comes pre-mounted with its Ortofon OM5E cartridge installed and aligned. Even the counterweight arrives in-position on the arm and adjusted for the desired playing weight. All you need to do is put on the SpinDeck's drive belt (a video is provided on the company's website to guide you here), felt mat, and dust cover. 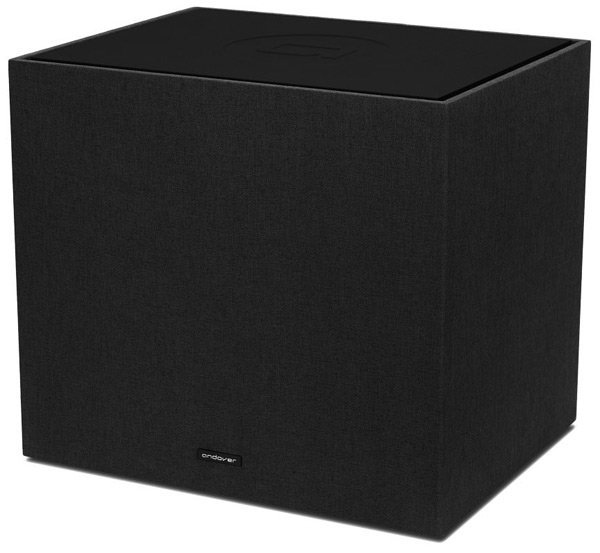 The SpinSub ($299) is the latest addition to the Spin System, and it, too, is a snap to set up. With a charcoal gray fabric covering all four sides, the slim SpinSub slips neatly onto the SpinStand's lower shelf. The idea of putting a subwoofer under a turntable is likely to cause even more consternation among audiophiles than the SpinBase might, but Andover insists that the SpinSub also employs the same IsoGroove Feedback Elimination technology as the SpinBase, and it won't transfer bass energy into the stand.

Each of the SpinSub's twin 6.5-inch woofers are set up in a boxer configuration, facing back-to-back with the drivers firing out to the sides. With this arrangement, energy transferred by the drivers into the sub enclosure—and from there into stand—will mostly cancel out, minimizing unwanted vibrations. As with seemingly everything from Andover, the SpinSub is an exercise in simplicity, with just volume and crossover controls and a single 3.5mm input jack for the output of the SpinBase. Power-up is controlled by the input signal, so once you have the level and crossover controls set, you'll never have to touch anything again. Andover suggests starting with both the level and crossover controls at the 12 o'clock position, which puts the crossover at around 85Hz. After extended listening, I ended up setting the SpinSub's crossover knob to around 11 o'clock and juiced the level up a bit. 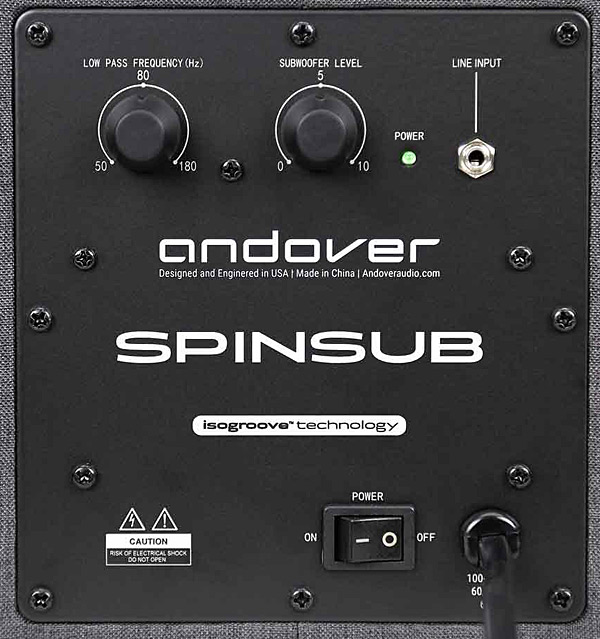 The final part of a complete Spin System is the SpinStand ($199), a stylish, four-shelf unit custom-sized to perfectly accommodate the SpinBase and SpinSub. It even includes a few nice features like a hanger for headphones, a tie-down strap to prevent tip-over accidents, and adjustable leveling feet. The middle shelf—also the lower shelf if you're not adding a SpinSub—holds about 60 LPs. Whoever created the SpinStand must have been a designer for IKEA in a previous life, because assembling it felt a lot like putting together an IKEA shelving unit. If you're comfortable with knocking out flat-packed Swedish furniture, you'll have no problem with the SpinStand. (I would suggest reading the paper instructions carefully, however, as the instructional video on Andover's YouTube channel glosses over a few important details.) When following the instructions carefully, the job of assembling a SpinStand should take about 30-40 minutes.

Turntables need to be care- fully leveled to work properly, but the SpinDeck does not have adjustable feet. For that reason, you'll instead want to use the SpinStand's own feet to make sure the whole system is perfectly stable and plumb. (For setup, I like to put a level directly on the turntable platter and then level the stand around it.) I have lots of tools to double-check factory settings for a turntable's tonearm and cartridge. Using these, I found that, as assembled, the SpinDeck's stylus overhang was set perfectly and its cartridge was set to track at two grams, the upper limit of the manufacturer's recommended range. This was probably a wise choice considering that the tonearm does not include any skating compensation, and the higher tracking force will help to keep the stylus secure in the record groove. The SpinDeck does come with a simple paper alignment protractor and a stylus pressure gauge to help with the install should you decide to change cartridges at some point, although a more likely upgrade would be to swap out the Ortofon 5E stylus with one of that company's fancier stylus options.

Same as when I reviewed the SpinBase, I found that the full Spin System sounds best when installed close to a wall, but well clear of any corners. Having said that, the simple tuning controls provided on the Spin- Base and SpinSub will let you fine-tune the sound so it works well with just about any room placement. Unlike with a lot of hi-fi rigs, the Spin System has a simple, clean, and modern look that's unlikely to visually offend. It's also available in both black and white to provide an optimal match with your room's decor. 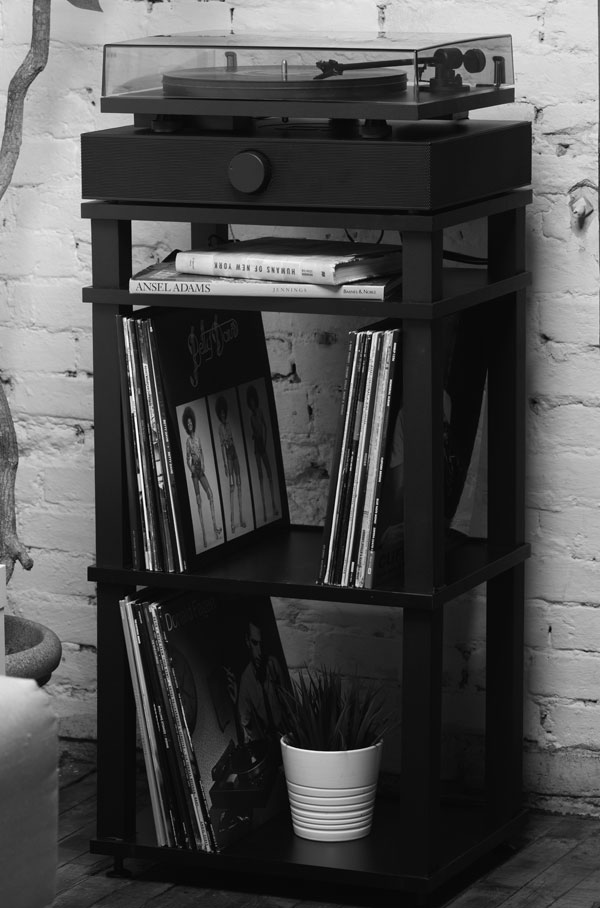 Performance
As someone who installs and adjusts exotic high-end turntables on a regular basis (it's my day job), I expected to find the SpinDeck a bit of a lightweight. But the more I used it the more impressed I was. Despite having limited features, with no anti-skating, arm height, or azimuth controls to play with, the tonearm came with well- adjusted bearings that showed low friction and minimal play. The Ortofon OM-5E cartridge is a classic with a history going back several decades, and it performed extremely well in the SpinDeck. One issue I had during regular SpinDeck use was the turntable belt snap- ping—both belts that came with the review unit gave out during my evaluation. However, Andover Audio says that care- fully following the belt setup video on its website should prevent this from happening in most cases. Also, that it will always issue belt replacements, no questions asked. (A support line with a human on the other end is staffed weekdays 9 to 5.)

In my review of the SpinBase, I noted that the system could deliver bass that was tight and clear, but also that it couldn't really match the visceral experience you get with bigger speakers. That's still true, but by adding the SpinSub, the sound gains a new sense of richness and body. On Peter Gabriel's classic track "Sledgehammer," for example, Tony Levin's incredible bass line had a sense of weight and definition that the SpinBase on its own simply couldn't muster. This '80s-era album can come across as pretty crunchy and compressed, but the SpinBase's open and natural delivery instead made it sound clear and relaxed. Another great example of the SpinSub's contribution to the system came when I listened to jazz bassist Ray Brown's Soular Energy album. The deep thrum of Ray's acoustic bass was delivered with a lot more sock, power, and swing. Thinking about the album title, I guess you could say that the SpinBase playing by itself brought the soul, but when coupled with the SpinSub, I also heard the energy. 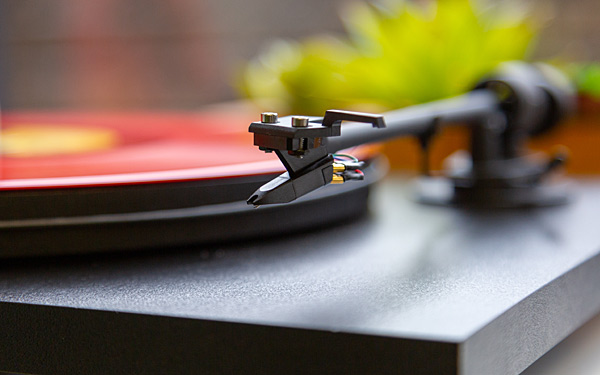 However, I did find that IsoGroove isolation technology isn't completely foolproof. If I cranked the volume to the max with the SpinSub also turned up beyond my preferred level, I could push things to the point where the system would start to feed back. This wasn't really program dependent and was most audible in the silent grooves between songs when the volume was maxed out. But this was an extreme example of Spin System use—if you want to recreate a rave inside your living room, I'd recom- mend moving the SpinSub to somewhere outside the SpinStand. The included 10-foot connecting cable offers plenty of flexibility in this regard.

Conclusion
The Spin System ticks a lot of boxes for a real-world all-in-one music rig. It's stylish, simple to set up and use, and it sounds great. Best of all, it's completely modular, so you could start with just playing from your phone using Bluetooth to a SpinBase, and then add the SpinDeck, SpinSub, and SpinStand over time. I highly recommend the Spin System to anyone seeking to put together a complete hi-fi rig for just above $1,000.